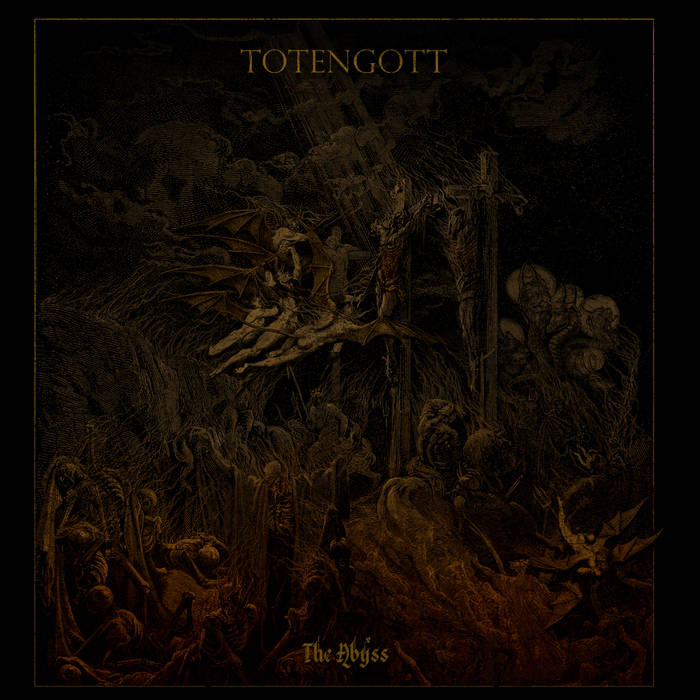 Appearing in the middle of the currently predictable and monochrome metal scene, Totengott is formed by three experienced musicians proceeding from metal, rock and hardcore bands from Asturias (Spain) with the aim to release the darkest songs that they are able to write and to claim the importance of evil and morbidity of compositions above technique, as well as rawness above demonstration. Being a difficult band to be “tagged”, Totengott can be introduced as an occult metal trio with doom/death influences but without leaving other genres aside such as thrash, gothic or ambient. From a musical and philosophical perspective, the band drinks from sources like the heaviest side of Celtic Frost, the raw and epic side of Bathory, the atonality of Kryzstof Penderecki, the sonic gravity of Conan and the texture experimentation of early Pink Floyd. Totengott avoids limitations in the way they understand music.

The release of “Doppelgänger” in July 2017, their first album, served to place them and to introduce them to the international metal scene. After gathering many positive media reviews in Metal Hammer, Decibel Magazine, This is metal and Invisible Oranges, and being considered one of the best metal albums of the year by MondoSonoro, DiabloRock, Goliath is dead, Necromance, and The Drinktim or Headbangers review, the band shaped a solid fan base in every place where they presented “Doppelgänger” with their raw and visceral live shows. So far, Totengott has shared stage with bands like Obituary, Sodom, Suffocation, Master, Entombed AD, Minsk, Stoned Jesus, Nifelheim, Holy Moses and Angelus Apatrida (among many others), and widely preached their musical philosophy in the stages of Spain and Portugal, playing in festivals like SWR Barroselas Fest (Portugal), Otero Brutal Fest (Spain), Mutant Fest (Spain), Wolfest (Spain)... Nevertheless, it wasn’t long before the band started working on the follow up of their first album in order to keep spreading their seed of dark and dense metal.

Thereby, their second album, “The Abyss” will be released on the 16th April 2019 via Xtreem Music and Burning Wold Records in CD, vinyl and digital formats. The album was recorded, produced and mixed by the band during 2018 at the New Farm Recording Studios (Asturias – Spain) and has been mastered by James Plotkin (well known for his work with bands like Conan, Electric Wizard, Isis, Amenra, Jesu…). The artwork was made by Néstor Ávalos (Moonspell, Bloodbath, Necrophobic, Dark Funeral, Rotting Christ…) and it contains guest appearances by Kam Lee (legendary vocals for Massacre, Death, The Grotesquery, Nattravnen…), Balc (Balmog, Ovakner) and Marija Krstevska (Drioma). The expectations created with their first album have been fulfilled with “The Abyss”: the album is more ambitious, more extreme, denser, heavier and darker than its predecessor. Four songs in more than 45 minutes of music in which the band is able to blend low end guitars with epic orchestrations, releasing death-thrash whiplash songs and flirting with dark wave, ambient and ethnic music. “The Abyss” confirms Totengott candidacy to be one of the new hidden gems in the underground European metal scene.

Burning World Records has been active since 2007. Mothership of Roadburn Records and based in Amsterdam, The Netherlands. The label is run by Jurgen (also formerly of Roadburnfest). Burning World also has a big mailorder with mainly doom/stoner/black metal/drone/industrial vinyl. ... more

Bandcamp Daily  your guide to the world of Bandcamp

Interviews With Butcher Brown and Slauson Malone, plus LP of the week by SAULT.